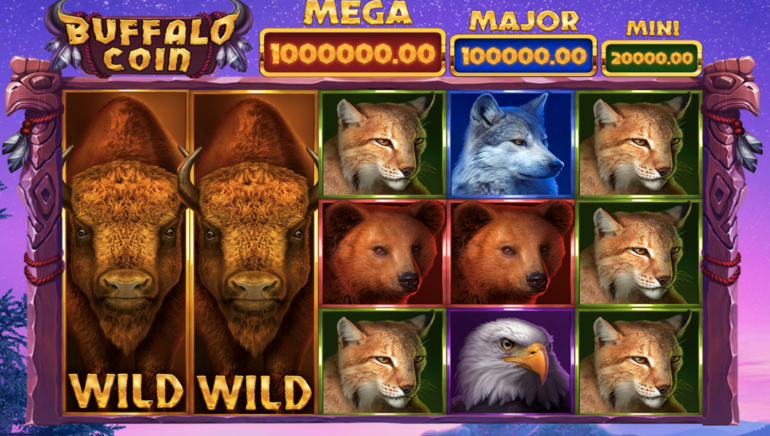 Buffalo Coin and 3x3 Hold the Spin are the latest mobile-friendly slots with a high return to player to grace online casinos powered by Gamzix.

Gamzix has returned with a couple of new slots that are guaranteed to win the hearts and minds of fans of the genre. The games are released internationally at online casinos powered by them, so punters can try the unique game mechanics. Buffalo Coin and 3x3 Hold the Spin are mobile-friendly slots that can be enjoyed on smartphones and tablets, so you can spin their wheels on the go.

There are more than a few coins up for grabs if you decide to spin the reels of Buffalo Coin, a colorful slot with a high return to the player. The game has 20 fixed lines, with a total of eight common symbols scattered across them, alongside the stacked wild, scatter, and bonus signs. The 96.3% RTP means that punters have a good chance to emerge victoriously in the long run, in anticipation of big wins.

Speaking of the maximum amount that can be grabbed when playing this game, you can win a maximum of 5200 times the bet. At least three scatter symbols are needed to activate the free space, but the number grows significantly if more scatter signs are discovered. Four of them will produce 10 spins and five will award 12 free games, and you can also buy the free spins for 40 times the bet.

The bonus game begins the moment players discover at least five coins and they remain on the reel until the round is over. Players enjoy three respins at the start of the Buffalo Coin bonus game and new coins will reset the counter, so the fun continues. The bonus game can start during regular gameplay or free space and players have a chance to win the Mini, Major or Mega jackpots.

The other slot released by Gamzix is inspired by the classics and 3x3 Hold the Spin has five fixed lines and nine common symbols plus a bonus game coin. The return to the player is 96.1% and players can win a maximum of 1579 times the wager. You need three coins to trigger the bonus game and the three respins at the start and be reset if additional coins drop.

At the end of the bonus round, the value of all the coins on the reels is added to the total prize field, so there’s the potential for big wins. The slot also has a gamble feature, so during the standard gameplay players can push for bigger winnings. 3x3 Hold the Spin is an exciting game with a classic vibe that uses the latest mechanics to key players at the edge of their seats.