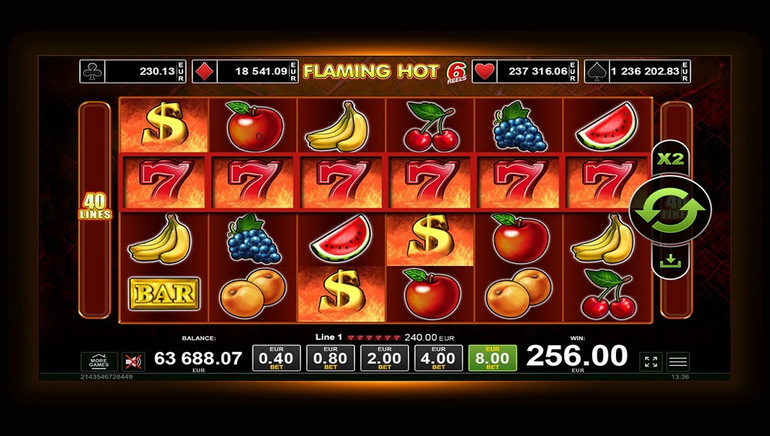 EGT Interactive (AKA -Amusnet Interactive) has a reputation for developing cool games that pass the test of time. They are also great at bringing back into the spotlight games that have lost their polish, due to fatigue and dated graphics. Flaming Hot 6 Reels is a shining example of such a game that pays tribute to a classic title. It instinctively appeals to those who appreciate games with retro symbols, while delivering superior visuals.

Punters who have had the opportunity to try the game released back in 2017 will fondly remember the original title. Flaming Hot 6 Reels is just like that, but better in every imaginable way, so it will appeal to both new players and veterans. If you feel nostalgia for the initial game, you will be pleasantly surprised to see that the sequel has captured its essence. This modern variety is full of rewards, so those who haven’t played the first game will appreciate spinning its reels just as much.

Just as the name indicates, the game is perfect if you want to turn the heat up a notch and aim for bigger winnings. The reels come to life whenever winning combinations are scored and players are notified both visually and through sound effects. The fruity theme is also self-evident and the moment players glance at the reels, they will appreciate the exciting graphics. Behind the fruity and juicy theme, punters will discover solid gameplay, with a high return to the player which is the cornerstone of successful slots.

Go on a Chase for the Mystery Jackpot

EGT Interactive has more than a few games that carry progressive jackpots and they rank high among the preferences of those who love slots. Flaming Hot 6 Reels is a well-paying game, especially if you win the Mystery Jackpot, which can be claimed when least expected. To win the jackpot, you need to trigger the Jackpot Cards Bonus game which is done by finding Jackpot Cards.

In anticipation of the lucky event, punters are kept at the edge of their seats by immersive gameplay. The 6 reels, 40 fixed lines video slot presents players with many winning opportunities, and the game matrix looks great on mobile devices. Scatter and wild symbols play a key role in maximizing winnings, by producing free spins, respectively replacing other signs on the real. Risk-averse punters who choose to secure their winnings, but punters have the chance to use the gamble feature to win twice as much.