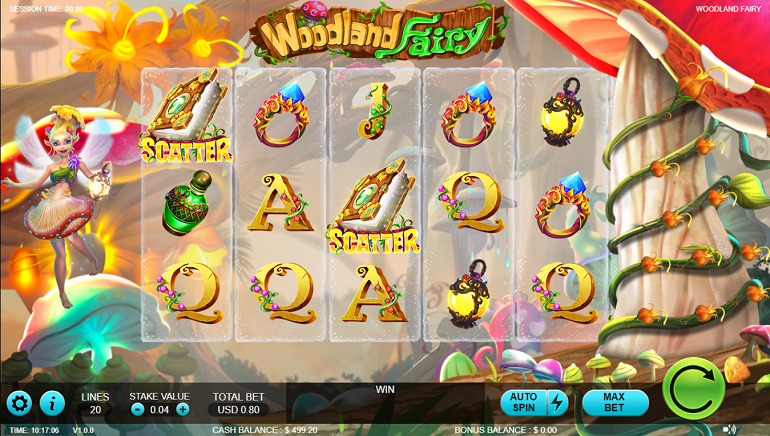 Free spins, transformative wild symbols, and a sixth reel can all be unlocked while playing the Woodland Fairy slot from Rocksalt Interactive at Videoslots Casino.

Videoslots Casino now has access to a brand new release in the form of the fantastical Woodland Fairy slot from Rocksalt Interactive. Hailing from India, Rocksalt Interactive has recently began to focus on the development of iGaming content, having previously supported video game developers such as EA and Zynga.

Magical artwork abounds in Woodland Fairy, who stands atop a bright toadstool amid other oversized plant-life. She appears next to a five-reel interface with three rows. A total of 15 symbols have the ability to land in place on the reels once each spin has been completed.

The mobile-compatible slot presents 20 fixed paylines and it’s possible to win 50x times the overall wager if six wild symbols make their appearance all at once. The unique wild fairy has a special power in that she can land and remove low-value symbols to enable a swap with higher-value symbols instead.

Book scatter symbols have been imbued with a power all of their own. Obtaining three or more can lead to free spins being triggered, at which point three glass jars are positioned atop the reels. The collection of sparkling stars can then enable the release of fairies who can upgrade low-value for high-value symbols.

As if those special features were not enough, Rocksalt Interactive has gone even further by integrating the Emerald Reel. This can be activated by gathering up crystal flower symbols, which can result in an extra reel opening to display even more wilds, scatters, and base game symbols than are normally allowed by the gameplay.